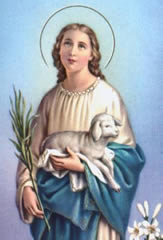 From times now shrouded in the mists of history comes to us Agnes, the Roman maiden, virgin and martyr, chosen as she has been, a patron saint of a women’s college. This college, our Alma Mater, is a pioneer in education for young women. It is very much a product of 20th century thinking, with a cultural and social component with regard to the rights and roles of women. Then, why Agnes, one may ask? How does she embody the qualities of head and heart that young girls today would do well to emulate?

In a world where daily life is a challenge with political and social instability, technological and information revolutions, conflicting value systems and the erosion of the family as a unit, it would do us well to recall that St. Agnes at thirteen, faced challenges no less formidable for her times. She defended her faith, and steeled herself against the vices, decadent traditions and attractions of Patrician society, as also against the alternate pleas and threats of her suitor Procus, son of a Roman Prefect.

To be a Christian in her times meant to embrace a faith that was alien to the authorities of Rome. Christianity was not merely politically incorrect, but also regarded as dangerous. In her steadfastness, Agnes displayed an extraordinary degree of moral and physical courage and the strength to stand virtually alone in the face of Rome’s wrath.

In a society where values warp all too easily and commitment seems old-fashioned, it is inspiring to think of Agnes’ commitment to Christ of the Cross. She followed Him to the pain and glory of death at the block.

While this institution looks at the 21st century squarely and steadily in the face, St. Agnes, far from receding in significance serves as an ideal, capturing the imagination, firing the heart and illuminating the way for generations of young women.