St. Agnes College (Autonomous) Mangaluru, India, is a premier Catholic Educational Institution founded on 2 July 1921 by a great visionary Mother Mary Aloysia A.C., the Second Superior General of the Apostolic Carmel Congregation who was the first recipient of Kaiser-i-Hind Gold Medal of the First Class in 1929, a prestigious National Award by the then British Government of India, for her contribution in the field of Women’s Education. St Agnes College was the first women’s college on the West Coast of India and the second under private management, in the whole country.

The Apostolic Carmel Congregation is the pioneer in women’s education in South India having established educational institutions to educate girls and women in the 19th Century (1870). The Congregation is the parent educational society having under its wings more than a thousand educational, technical, health and social service institutions catering to the needs of varied students all over the world.
The sapling that was planted in 1920-21 in humanities is now branched into different streams B.A.:History,Economics,Political Science, Psychology, Secretarial Practice, Office Management, English Major, Journalism and 5 languages-English, Kannada/ Hindi/ French/ Malayalam. In 1933 the B.Sc. programmes with Botany, Mathematics and Natural Sciences were introduced. Over the years various courses were added.

27 December 1936 marked the first Mangalorean Diocesan Catholic Women’s Conference and the College provided all the facilities, rejoicing over the spirit of Catholic action displayed by the ladies of Mangalore.

To inculcate responsibility and loyalty in students to their Alma Mater, the College inaugurated its first College Student Union in 1936. Various Associations were formed, such as the Agnesian Alumnae Association, Literary and Debating Association, History, Economics, Natural Science, Dramatics, Games Associations, Language

Associations – Kanarese and Malayalam.
For the first time in the history of St Agnes College a lady, Begum Sultana Mir Amiruddin, an enthusiastic patron of women’s education graced the presidential chair on the College Day on 22 January 1938.

The Mission Week of 1939 organized by the college inspired 16 graduates to dedicate themselves in Religious Orders. The creativity of hostellers found expression in the production of an annual book, ‘The Magical Threshold’, published in 1939. In the same year, the college brought out its first ‘Bulletin Bureau’.

Right from the inception of the college, primacy was given to foster spiritual and moral values among students through daily Religion and Ethic classes. The catholic students actively participated in various associations: Sodality of Our Lady, Catholic Action League, Legion of Mary, All India Catholic University Federation and the Student Missionary League.

During the II world war 1939, faculty members and students prayed fervently for peace and raised for the war-stricken people and the College was awarded three medals for their contributions.

The college obtained affiliation in Science streams for the Intermediate in 1941 which enabled Agnesians to qualify for medical profession. The University was well pleased with the standards maintained by the College and granted affiliation in 1943 for Household Arts for the Intermediate programme and Home Science as a B.Sc. Course for the Degree level.

The year 1946 marked the Silver Jubilee of the College. A three-day programme of a religious, cultural and social nature was organized to celebrate this great milestone. Her Excellency Lady Nye, wife of the Governor of Madras visited the college and expressed her appreciation on the work done by the Institution.

From 1930 to 1953 the college had hand-written magazines, however in 1954, the first printed version was brought out. St. Agnes College was the only privileged educational Institution in Mangalore to be visited by Mrs Indira Gandhi on her South India tour, on 28th September 1955 years before she became the first woman Prime Minister of India.

In 1956 the College ventured into professional Social Work, a one year P.G. Diploma Course, directed by an American professional, Miss Maria Frances Yasas and Miss Christine Francaux, a Belgian scholar. St. Agnes College was the first in South India to introduce a two-year degree course and a two year Post Graduate Degree course in Social Work in 1957.

To provide job opportunity for women in business and banking, the college started Commerce programme at the P.U.C level in 1969 and at the Degree level in 1971. Perceiving the signs of time, the college introduced ACCA (Association of Chartered certified Accountants) in association with ISDC, UK and B.Com Professional (CA).As a Centenary memorial of the Congregation a Special School for differently-abled children was established. It is a service project of the College undertaken by the department of Psychology.

St. Agnes College launched National Service Scheme (NSS), in 1972. The University and the Government recognized the yeoman service rendered by the NSS Units and were awarded with university, state and national awards.

The college celebrated its Diamond Jubilee in 1981 which was another historical milestone. A new vocation oriented BBM programme was introduced in 1986. To equip the students with Information Technology, the St Agnes Institute of Computer Education was set up in 1986 tutored by The Digital India’s Educational Division – ‘The Institute of Computer Education’, New Delhi. And a Post Graduate Diploma Course in Computer Application was first introduced in 1988. The advancement of Technology led to the introduction of BCA in 2006.

The college celebrated its Platinum Jubilee in 1996. The celebration was inaugurated by Mother Teresa, the Founder of the Missionaries of Charity, Calcutta, an embodiment of compassion and love.
The College took the initiative of submitting itself to the accreditation process conducted by the NAAC. It was the first institution in Mangalore University to do so. The College had the honor of being awarded a ‘Five Star’ grade. Following the re-accreditation process by the NAAC in 2005.In 2012, the College earned an ‘A’ grade and in 2017, the college has been accredited by NAAC with ‘A+’ with a CGPA of 3.65/4 in the fourth cycle.

It has, besides, been recognized as a ‘College with Potential for Excellence’ in 2006 and again in 2011 by the Post ‘CPE’ PHASE II and has been awarded ‘College of Excellence’ by UGC, New Delhi in the year 2017 and has been the recipient of the ‘Jimmy and Roselyn Carter Foundation Partnership Award’ for its path breaking work in the field of watershed management which has greatly benefited villages in the suburbs of Mangalore. The college has received ‘Star College Status by DBT, MST, Govt. of India.

However, no institution committed to the cause of higher education can rest contended on its laurels. St Agnes College is sensitively aware of this. Therefore, to promote academic excellence in teaching and research, the Management of St Agnes College has accepted the status of academic autonomy for the College since 2007. In the autonomous set up, the College is free to frame its own syllabi for the various courses and adopt suitable innovative methods of Teaching, Learning and Evaluation.

The Alma Mater will turn 100 in 2021; a hundred years in the service of empowering women. 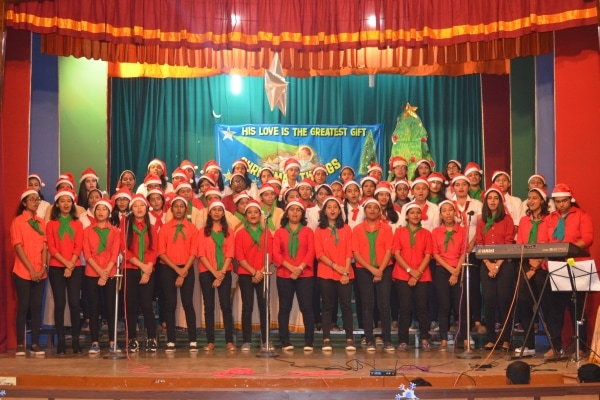 Every year the College organizes NAVIDAD programme. The objective of this programme is to instill in students the spirit of sharing and caring and to help the economically backward in society. The project, started in the year 1998, has provided homes for the support staff and the needy students of the college for the past 20 years. Over the years this thoughtful mission of the College has made an impression on all stakeholders of sharing in the joy of the less fortunate. A big difference to a number of homeless families. 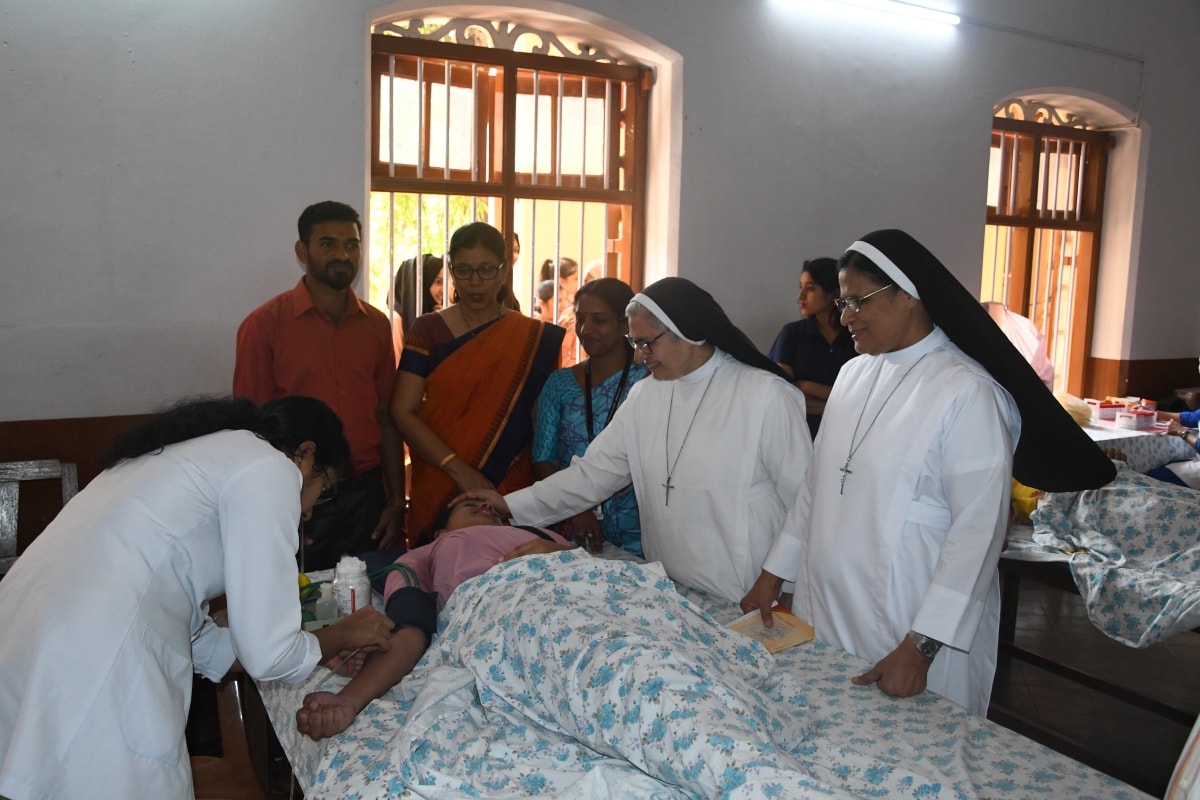 NSS and YRC take initiative to organise this annual blood donation camp. The Blood Donation camps have been organized from the past 10 years and about 80-100 pints of blood collected and given to Blood Bank at Fr. Muller Medical College Hospital, Mangaluru. Besides, whenever there is an SOS call from any hospital, students generously donate blood to save lives. Fr. Muller hospital has recognized this noble cause and awarded a certificate of appreciation for donating blood continuously for the past years.

The Annual magazines, Calendar cover pages, Sports day march past, College day programme and a number of other programmes and competitions reflect the essence of the UNO International themes. The Magazine Week gives a wider scope for the observation and celebration of the International themes.

Eminent resource persons take up sessions for the first year degree students to help them deal with physical, emotional and social changes which takes place in the process of growing up.

Manned entirely by Commerce students, under the supervision of a faculty member, the Helpline, true to its name, assists in supplying stationery and other requirements in the morning and during the lunch break. The profit is utilised to pay the examination fees of the students who generously serve their alma mater. The college shows its appreciation of the selfless service by honouring them with certificates on the Merit Day.

The college has adopted the Government First Grade College for Women, Balmatta under the Aptha Mithra Yojana of the Government of Karnataka, and has provided the facilities of the college to organise their programmes. 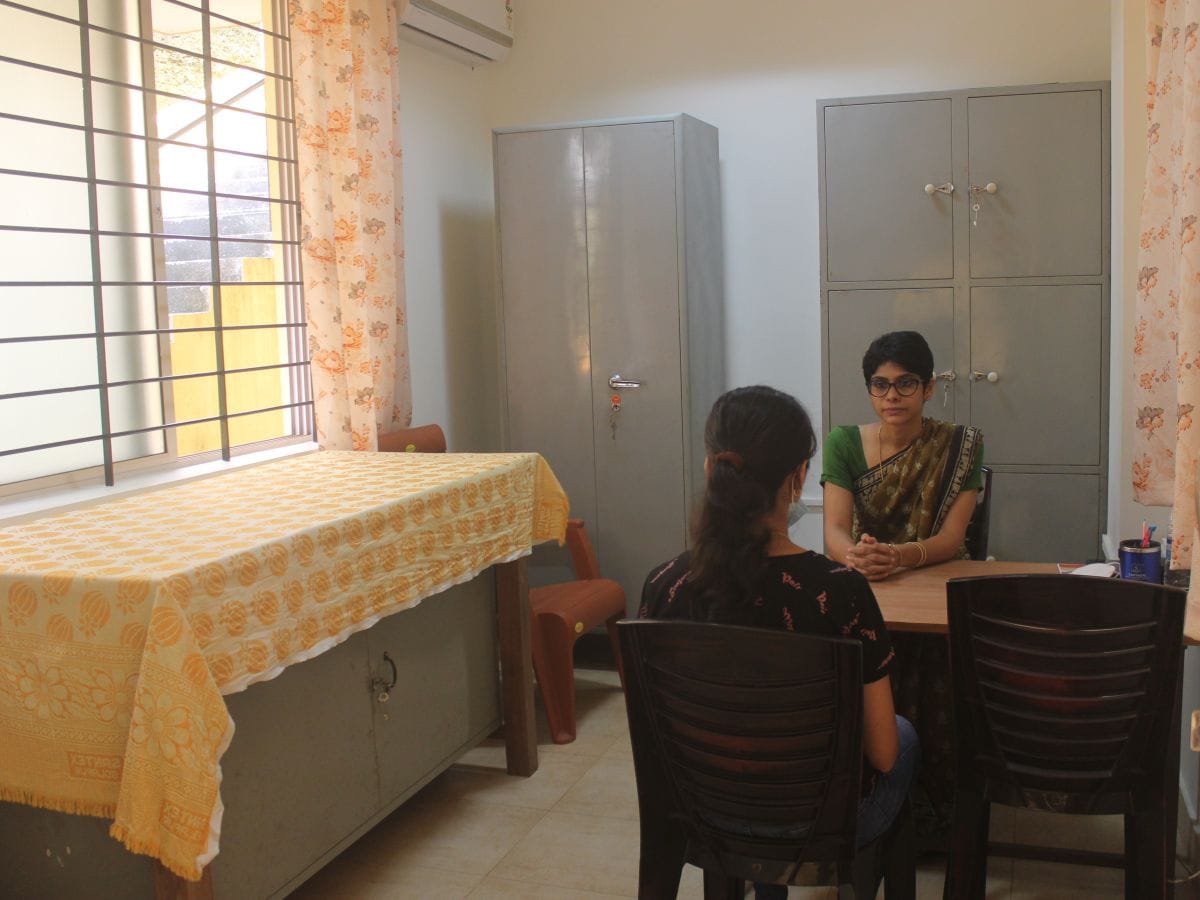 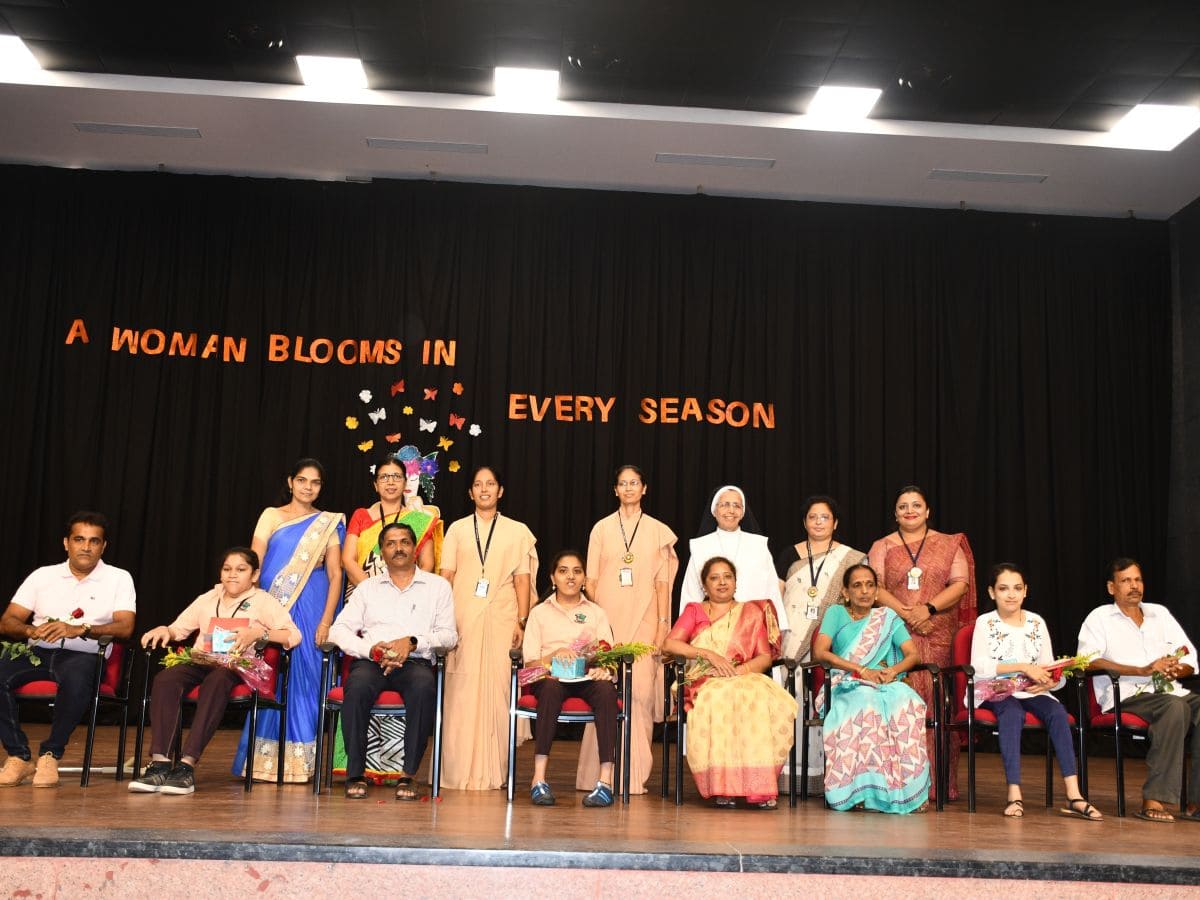 Every year and four student achievers are honoured on the occasion of International Day for Women which is celebrated in association with the Women’s Cell and the alumni of the College.

Mother Mary Aloysia A.C. Endowment Lecture and Award for the Distinguished Alumna/woman entrepreneur is organised on the occasion of Foundation day. The event is organised by the IQAC. 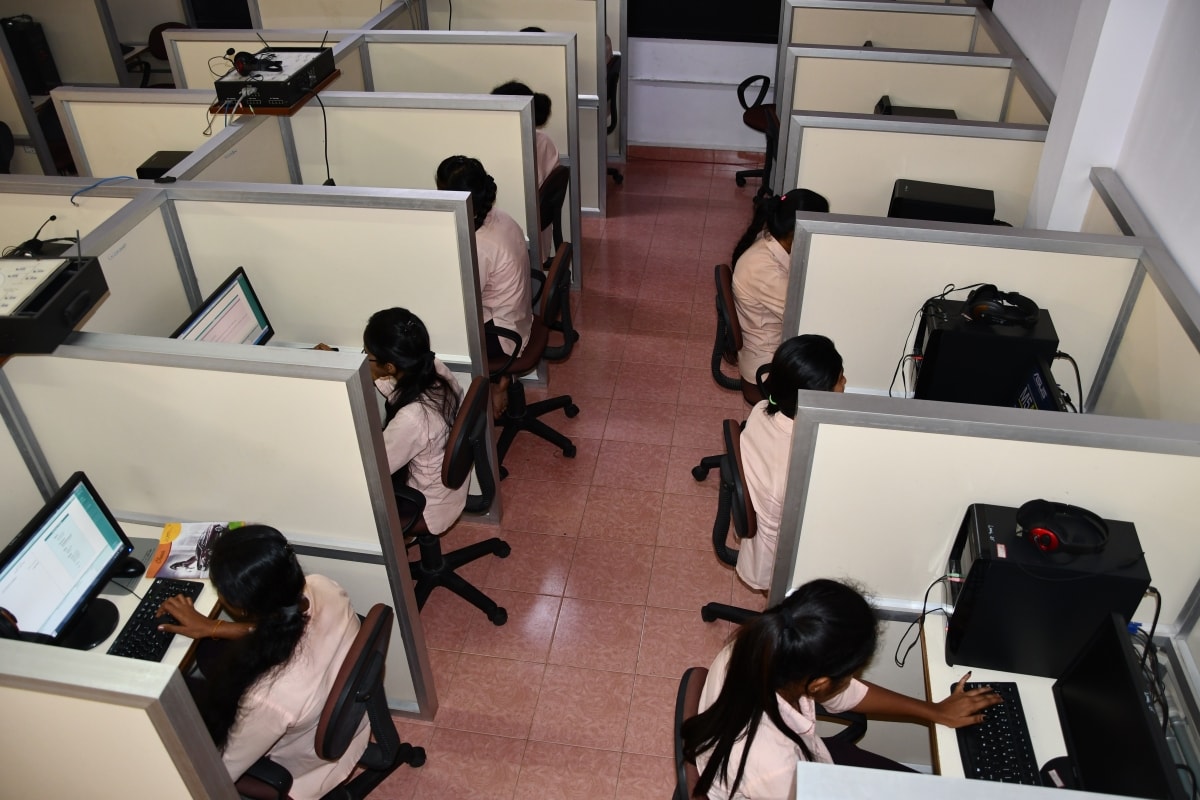 The college is conducting on-line feedback from students on curricular aspects, student satisfaction and teacher quality. 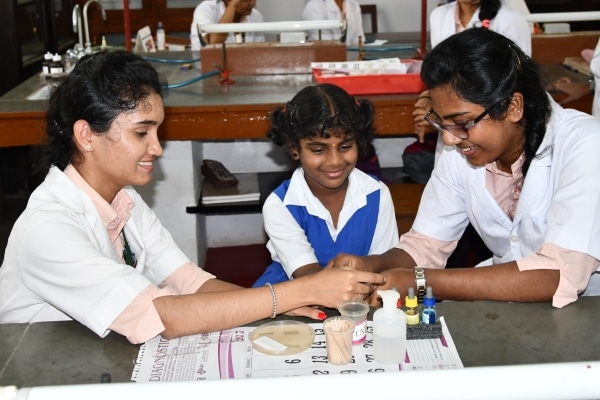 The programme aims to make students aware of their blood group and understand the significance of each blood group/blood donation/Rh factor during pregnancy. The Department of Microbiology has performed blood typing for an average of 150 students every year.

Every year in March/April the Internal Quality Assurance Cell conducts the Annual Academic Audit of all UG/PG departments and student support systems.

The ATC Project was started in 2015-16 with the objectives to inculcate in students a sense of social responsibility, to transform students into healthy individuals valuing right things in life and to ensure that the students going out of the portals of St. Agnes College will be the powerful agents of change at home and society.On Saturdays, groups of Final Year students take up Community Service activities under the guidance of teachers in the five adopted villages of Munnur, Someshwar, Amalamogaru, Kuttar and Harekala villages. 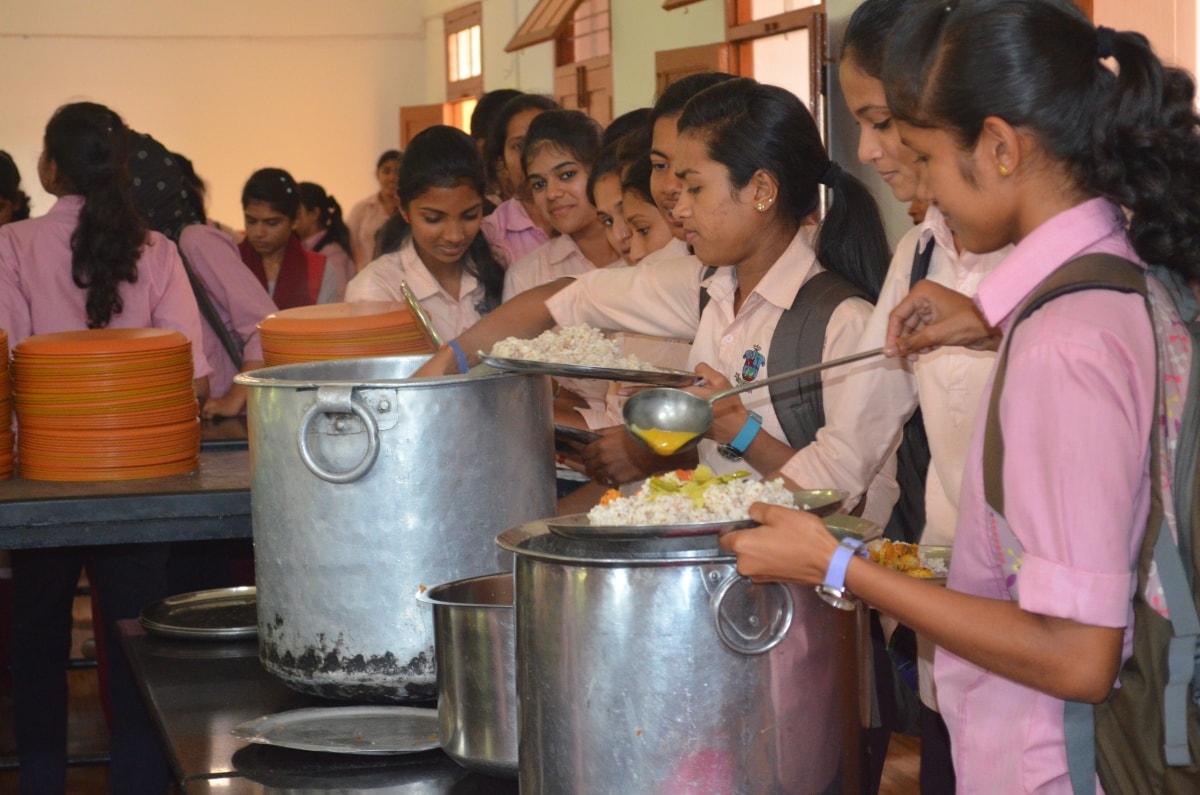 The College both faculty and students begin the day with prayer led by the Vice Principal on the PAS. The various and Associations take turns to prepare the prayer service. Notices of the Day and Daily news is communicated during this time.