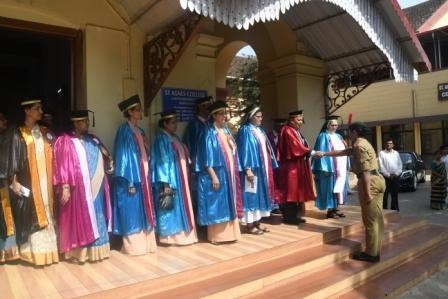 The Eighth Graduation Day of St Agnes College (Autonomous) was held on Saturday, 4 May 2019, on the College Grounds with all the spiritedness that the occasion demanded. The programme commenced at 3.00 p.m. with a ceremonial march from the NAAC room, Avila Block, to the venue immediately followed by the invocation in the form of Nadageethe. Among the dignitaries present were, the esteemed Chief Guest Dr N.Vinaya Hegde Hon’ble Chancellor, Nitte (Deemed to be University), The President of the programme, Sr Dr Maria Roopa A.C.( Joint Secretary St Agnes College,the members of the Governing Body and the Academic Council,The Registrar, The IQAC Co-ordinator, the Deans of all the faculties, the members of the various Boards of studies and Boards of Examiners,Members of PTA, PG Co-ordinator, also joined the ceremonial march. The Alumni and the parents of the graduates were among the special invitees for the ceremony. Dr Ita D’souza welcomed the gathering and introduced the Chief guest and soon after the Principal of St. Agnes College administered the Oath to the fresh graduates and thereafter the President of the programme declared the Graduation Day open and the Registrar ,St Agnes College (Autonomous) Mr. Charles Pais presented the graduates to the President. There were 680 graduates in all, 600 undergraduates and 80 Postgraduates including16 rank holders who received ranks with medals and cash prizes.

The Chief guest Dr Vinaya Hegde Chancellor NITTE ( Deemed to be University)who is an Educationist, Industrialist and Philanthrophist, in his Graduation day address congratulated the graduates on their success and wished them a bright future ahead. In his address the Chief guest laid emphasis on the mission of higher learning to maintain high standards to compete globally, and hoped that these graduates make a substantial contribution not only to themselves and their families but also to their profession, community, nation and the world at large. As someone connected with the higher educational landscape of Mangalore, he wanted them to realise that they have a great responsibility, being an Alumna of a College like St. Agnes. Being accredited as an “A+” Grade College in the fourth Cycle of accreditation by NAAC, having been declared as a College of Excellence by UGC of Government of India and having been accorded the Star College Status by Department of Bio-Technology, Ministry of Science and Technology, Government of India, St. Agnes College has already set high standards in the field of higher education. Having graduated from such an institute, he advised the graduates to demonstrate by their words and deeds that they are no ordinary graduates. He also said that unlike millions of youngsters in this country, they are lucky to have this rare distinction. In spite of having more than 900 Universities and 50,000 colleges in India, hardly 30 per cent of our population between the age group of 18-23 goes for higher education. This percentage, popularly known as the Gross Enrolment Ratio (GER), ranges, anywhere between 60 to 80 percent in developed nations. The issues of quality, affordability and employability are today posing serious challenges to our higher education system. Personally he felt that academic autonomy enjoyed by Colleges like Agnes can address these issues more successfully.

In her Presidential Address, Sr Maria Roopa A.C. briefly spoke on the glorious history of the institution founded by Mother Mary Aloysia, and sustained by efforts and sacrifices made by many others who walk on the path shown by God and the foundress; she congratulated the graduates and requested them to live by the compassion and value system inculcated in them by the college.

The Chief Guest in the presence of the dignitaries awarded the Rank holders of all faculties with medals, prizes and conferred the degrees to all the Graduates.Mrs. Sabeena HOD of BBA was the Master of Ceremonies and Dr. Kavyashree Asst Prof. of Psychology P.G. delivered the Vote of thanks. The Programme concluded at 5.00 p.m. with the singing of the National Anthem.

This is the Eighth Graduation day and a significant milestone in the journey of the Institution; St Agnes College( Autonomous) which attained Academic Autonomy in 2007 and made its foray into Post Graduate Education in 2008, is now the only college under Mangalore University, the third in the state of Karnataka and eighteenth in the country to be accredited with an A+ grade by NAAC with a CGPA of 3.65 in the fourth cycle. The College was also granted the status of ‘College of Excellence’ by UGC in early 2017. It is indeed a matter of Honour and Pride that the College is now on the threshold of its Centennial Year in 2020-21 and a host of activities and a celebration are being deliberated upon for the same. 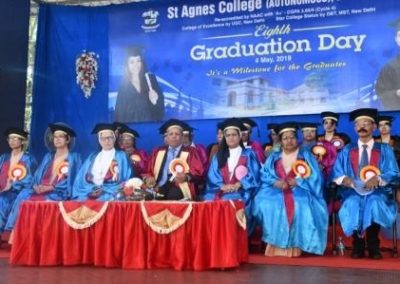 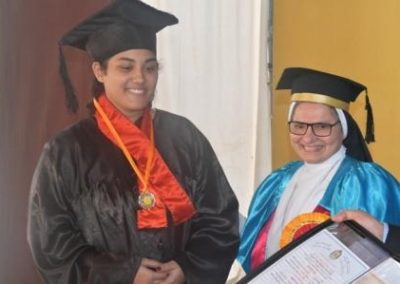 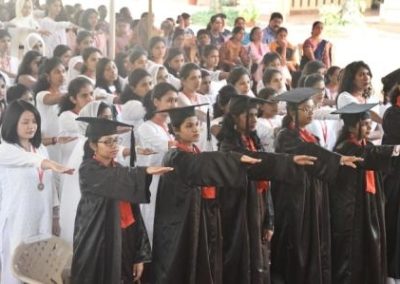 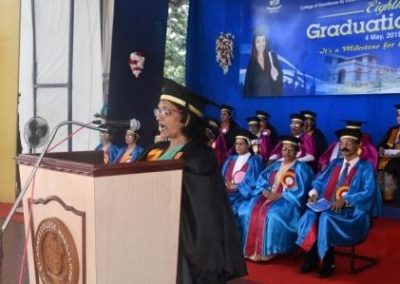 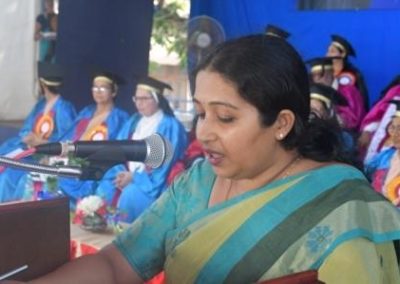 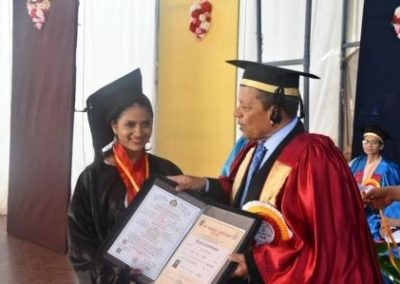 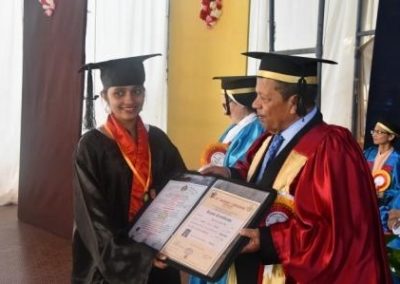 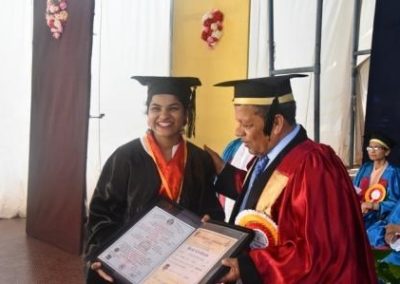 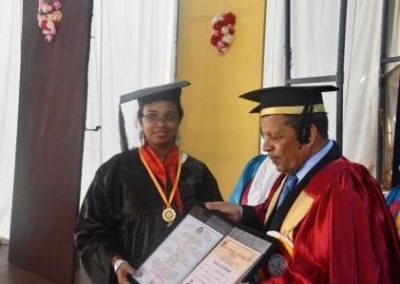 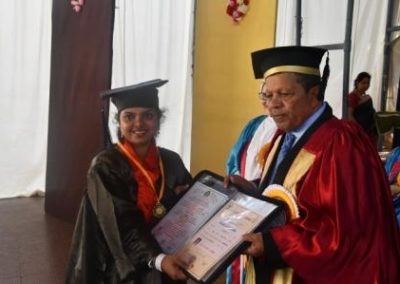 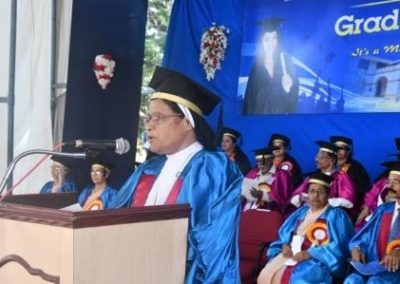 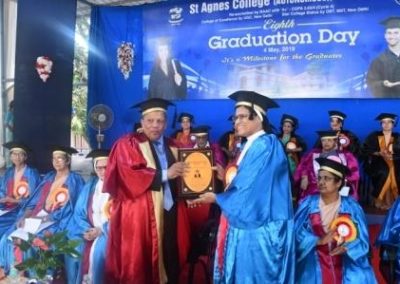 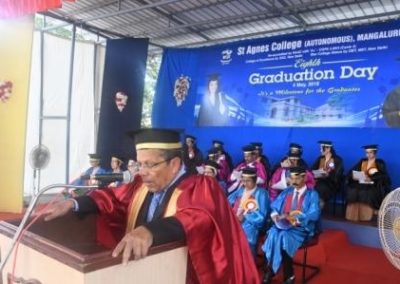 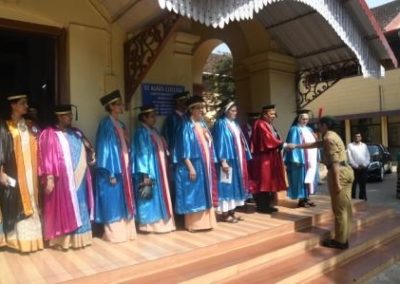