Responding to Survivors of Trauma

The Psychology and the Clinical Psychology department of  St Agnes College PG Centre conducted a National Seminar on Responding to Survivors of Trauma. The aim of the seminar was to orient the students on the topic trauma and how to interact with such patients.
The seminar began a soulful  prayer song by Ms Ann Tharakan and team.  The MC for the event was Ms Neha Tojan. Dr. V. Premanand the Head of the department of Psychology welcomed the Chief Guest   Dr. P V Bhandhary, a Consultant Psychiatrist and Director of Dr. A.V Baliga Memorial Hospital, Udupi. He also welcomed all the participants after which Sr. Dr Jeswina A.C Principal of St. Agnes college.  addressed the gathering by giving a small talk on trauma.

The speakers for  the day were Mr. Syam R Ravindran ,Consultant Clinical Psychologist and Hypnotherapist, Certified EDMR Therapist and Consultant, Assistant Professor Department of Clinical Psychology, Kasturba Hospital, MCHP, MAHE, Manipal. Dr.Bhasi Sukumaran, Professor and Head ,Clinical Psychology, SRM medical college  Hospital and Research Center, Chennai. Ms Aswini NV,Founder Director of Muktha Foundation.The staff and students from both the departments and other colleges also attended the seminar.
The chief guest, Dr.P.V Bhandhary gave the keynote address. As the keynote speaker, he gave an introduction on trauma and people affected by it. He also talked about the stress response system and impact of exposure to trauma. He mentioned the words “ What the mind does not know,eye will not see” to express his point. The vote of thanks for the inaugural session was delivered by  Ms. Sahasra Sham Rao.

The first session was an Orientation to Trauma which was taken up by Mr. Shyam R Ravindran. The session began with introducing Mr Syam to the audience. The introduction was carried out by Anupma of 1st year Msc Clinical Psychology. The session by Mr Syam  focused on orienting the participants to trauma, the brain functions and activities related to trauma. He spoke about PTSD and CPTSD that gave an insight on the psychological, physical and social aspects of trauma. The session was then concluded after a  vote of thanks was delivered by Meghna Johnson of II Msc Clinical Psychology.

The second session was on the topic of Psychological First Aid which was taken up by Dr.BhasiSukumaran. The session began with introducing Dr.Bhasi to the audience. The introduction was carried out by Christeena Anto of 1st year Msc. Clinical Psychology. Dr.Bhasi commenced the session by defining the topic. He walked us through what are the aims of Psychological First Aid as well as the processes involved. He gave us an idea about the 5 essential elements and the principles of trauma debriefing the most important one being Critical Incident Debriefing. The talk then progressed onto the 8 core elements of psychological first aid and Group based Solution Focused Therapy for survivors of disaster. The session was very detailed and in depth. It was very informative and enhanced our knowledge on providing first aid to survivors of trauma.

The session concluded with the narration of a few cases and the vote of thanks was delivered by Alison Lobo of 1st year Msc. Clinical psychology

The final session of the seminar was on the topic Child sexual abuse : Prevention and Psychological Intervention by Ms Ashwini N.  V. welcome speech was delivered by Paige from I Clinical Psychology.Topics such as types of sexual abuse, levels of prevention, signs and myths related to child sexual abuse and intervention methods like Response based narrative practice were discussed.

The speaker was able to enlighten the participants with a lot of information regarding sexual abuse and how to deal with survivors of such trauma by giving real life cases.The session was very informative and interactive.

The session was concluded with Jeanne delivering the vote of thanks to the speaker. This was followed by a Q/A session where the participants were given chance to ask questions to all the three speakers regarding the topics discussed throughout the day.

Finally a vote of thanks was delivered  by Mrs Mili Paul, the staff convener for the national seminar expressing her sincere gratitude to the resource speakers, staff, participants and the student convener Ms Aleena George of II Msc Psychology. 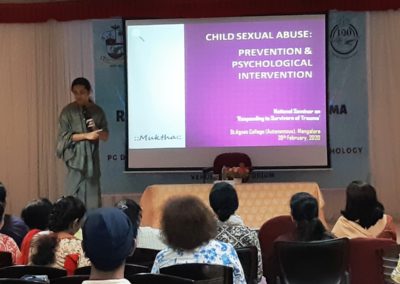 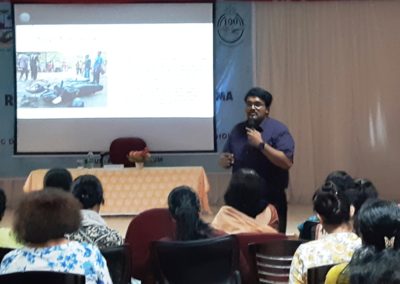 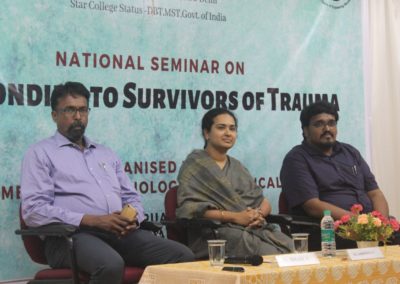